The Fairground Craft & Design Centre is the fulfillment of a vision by the Parish Council to rescue a derelict site designated by Test Valley Borough Council to become an industrial site. The Parish Council fought to have the area reassigned as part small industrial, part housing and part heritage site because of its long history. They believed that this designation would be more suitable for the area and local community. 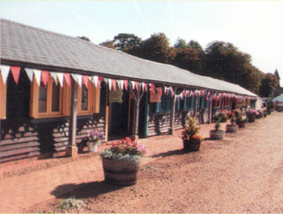 The plan they developed was to encourage community interest in arts and crafts and in particular to provide economic studio space for small local crafts businesses and to provide Gallery space for new and established local artists to exhibit. Work began on the site in the Year 2000 and the Village Hall was finished in 2001. The Craft Centre was officially opened in October 2005 .

Weyhill lies at the crossroads of eight ancient trackways and roads including Harrow Way, used for moving tin from Cornwall to the Kentish ports, and the Gold Road which was a system of tracks over which gold was transported from Ireland via the south coast to the Continent. These routes were used even before the middle ages and it seems that since time immemorial people have driven their animals along these tracks and droves, carrying whatever else they had to sell, before gathering at this important crossroads to trade.

The ﬁrst written record of the Weyhill Fair dates From 1225 in a document From Henry Vll to his advisor and Sherittot Hampshire Hugh de Nevil or ’Hugh the Big’, asking him to buy 150 pigs at the forthcoming Fair. This suggests that the Fair was already a well established event. At this time the Fair was known as ‘Fair of Le We’. So important was the site that in 1246 ,there was a duel Fought in Blissimore Hall Acre over its ownership; William de Devenys losing both the land and his life to William Cotele.

Geoffrey Chaucer (1340-1400), author of ’The Canterbury Tales’, owned nearby Ramridge Manor and part of his land was used for the Fair. It is quite possible that he heard some of his famous tales from people that passed through the Weyhill Fair. Harrow Way is thought to be on the route by which pilgrims travelled to Canterbury. A letter written by Princess Elizabeth in 1554 to Sir William Cecil, mentions that there had been a Fair at Weyhill, or ’Wacehill’.  Elizabeth was patron of Ramridge Manor, which had by this time become Almshouses for thirteen poor men.

The Fair in the Middle Ages would have been an extremely lively place; as well as the sales of animals there would have been jousting and sword
fighting, dog-baiting, bear-baiting and cock fighting with strolling minstrels moving amongst the crowds. There were also Mystery Plays to watch and mummers, which were seasonal Folk plays, an early form of street entertainment.

In Fact, by the sixteenth century the fair had grown to be such a huge event that it even had its own court on site to settle disputes and deal with any lawlessness that was bound to occur at such a large gathering. This was known as the Court of Pie Powder, the name coming from the French ’pieds poudres’ or dusty Feet. 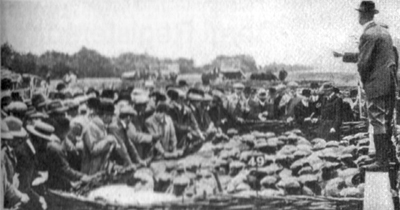 The Fair continued to grow right up until the 19th Century, with huge numbers of animals being traded; up to 100,000 sheep in a single day. At the thriving horse fair, horses from Ireland were ’charged up and down, and over hurdles to show them off, also causing danger to everyone!

There was a substantial cheese Fair during the 1800s, with cheese From Somerset, Wiltshire, Gloucestershire, Hampshire and further aﬁeld. Pilfering was apparently a problem with things coming to a head when a policeman who was supposed to be guarding the stock, was caught stealing a fine cheddar cheese. To prevent further problems, an enclosed cheese market 90 foot square was built with booths on each of its four sides.

On Blissimore Hall Acre, where the craft centre now stands, booths were erected in the 19th century for the sale of hops. The hops came From Farnham in Surrey and the booths were known as Farnham Row. A report From 1865 states that there were 7000 pockets of hops pitched ’which quite filled the Farnham Row’. 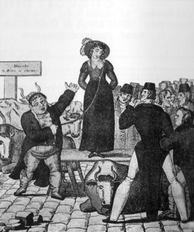 In Thomas Hardy’s novel ’The Mayor of Casterbridge’, written in 1886, Hardy describes how Michael Henchard, after becoming drunk at the Weyhill Fair (called Weydon Priors in the book), sold his wife to a sailor for ﬁve guineas.  Apparently the story was based on fact. The Annual Register of the Weyhill Fair for 1852 records that a farmer named Joseph Thomson offered his wife of three years for sale at the price of 5O shillings. He told the crowd she was his tormentor and a Domestic curse, saying ”may God deliver us from troublesome wives and frolicsome women”.
Not surprisingly offers were thin on the ground, but he eventually accepted one from a man named Henry Mears of 20 shillings and a Newfoundland dog in part exchange. The Annual Register concluded that all parties were quite content with the arrangement.
From reports in the records of the Andover Advertiser, it is apparent that Weyhill Fair began to decline in the latter part of the 19th century. Although still being described in 1865 as the chief annual Fair of the South of England, in 1867 the comment was made that the quality of the shows appeared to deteriorate every year. The article goes on to describe ’Day’s Menagerie’ which included "one very fine lion, a horse 20 hands high, an enormous fat pig and other objects of interest to persons fond of such shows”. The attendance on the Monday, was said to be, ”very large indeed, in spite of the mud and dirt which pervaded everything connected with the Fair”. On Tuesday it rained all day and by Wednesday there was very little left of the Fair except in the hop rows.


An article From the Advertiser dated 19th October 1888 mentions that there were ”less forms of amusement than usual but the refreshment booths must have done a good trade judging from the large number of people the worse for liquor seen on the road returning to Andover, a larger number than we have seen For years.”   In October 1889 it is reported that in the hop booths only 1000 pockets had been pitched and attendance was down; only one cheese merchant occupied the cheese Fair.

An account From Mr Sidney Butler, of the Weyhill Fair in the early 20th century indicates that by this time, there was no hop or cheese fair, but the sheep, cattle and horse fair continued. The night before the fair, thousands of sheep were driven through Andover to be penned on the Fairground and that horses were put through their paces, jumping all the hurdles on the Fairground!”

On the other side of the Fair, there were selling booths, where one could purchase almost anything that might be useful in the Farming trade.  Mr Butler described the pleasure Fair as a big attraction, with another major crowd-puller being a boxing booth which he said was "a pretty rough place where, if you couldn't use your fists, you kept your mouth shut.”

Most people still got to the Fair by walking, sometimes many miles. Farm hands traditionally changed their jobs at Michaelmas, and to advertise that they were for hire, men would wear favours in their hats, such as a piece of wool if they were a shepherd. lf a farmer saw a suitable man, he would hire him on the spot.

The sheep and cattle fair continued to decline in the years before and after the Second World War, with only 1,400 sheep being offered for sale in 1948, although the pleasure fair continued to thrive.  Improved communications, the introduction of turnpike roads and transport on the railways gradually removed the need for such large gatherings for the sale of animals especially as it took a drover up to three weeks to get his ﬂock to the Fairground. The last sheep and cattle auction at Weyhill was held by Woolley and Wallis of Salisbury in 1957, with so few animals being offered for sale that it was not economic for them to continue. 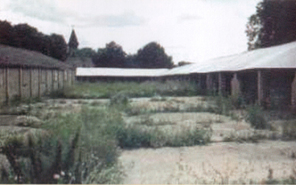 After the fairs ceased the site was bought by Dunnings Associates, a building and contracting company. The booths were used as storage sheds and sometimes Farm animals were penned in them.

When Dunnings went into receivership in 1991 the site was left to fall into disrepair.