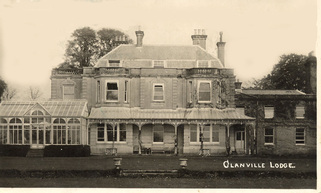 ﻿A brief history of Weyhill parish﻿

Weyhill parish should correctly be called Penton Grafton but both names have been used since the nineteenth century. In area it is 1,892 acres (765 ha.) and slopes from a heig﻿ht above se﻿﻿a level of c. 250 ft  (76 m.) to the south to c.350 ft. (106 m.) at the north. Its subsoil is chalk covered with light soil with flints and some gravels.

The site of a Neolithic cremation and burial site lies very near the north east parish boundary with Penton Mewsey. Remains of Roman buildings of the third and fourth centuries A.D. have been found. Most notable is the site of a Roman villa at Clanville with evidence of early Christian occupation there. Its pewter vessels and a mosaic floor can today be seen at the British Museum. 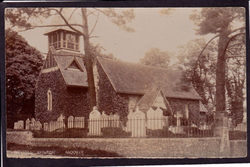 Today, the parish contains three distinct communities and reflects the existence from the tenth to twentieth centuries of two manors (landholdings), Ramridge and Clanville. The larger, Ramridge, comprised today's scattered settlement of Weyhill, centred on its church. A mile to the east is Penton Grafton hamlet, immediately adjacent to Penton Mewsey. Although still separated by the parish boundary which runs mostly down the village street, Chalkcroft Lane, the two socially are now a single community with a total population (2014) of about 800.

Domesday Book (1086) records both Pentons as 'Penitone'. Before 1066 what is now Grafton belonged to Edward the Confessor's Queen Edith and Mewsey to the king himself. This suggests that originally the two Pentons were one. The king also owned the manor of Clanville which included Nutbane, but had granted it to one of his thegns. William the Conqueror gave Ramridge to the Abbey of Grestein in Normandy. Grafton is a corruption of Grestein. Ramridge's produce and profits went to the abbey until 1414 when Henry V, at war with the French, confiscated it. By 1436 it was owned by Alice, duchess of Suffolk who then gave it to support her new foundation of Ewelme Almshouses in Oxfordshire. Substantial parts of the former Ramridge manor still belong to Ewelme in 2014, including parts of Clanville also.

Weyhill's church, though largely rebuilt between 1864 and 1880, is on an ancient religious site. 'Wey' derives from 'weoh' or 'wih', Old English words meaning a shrine containing an idol and suggesting Weyhill originally as a place of heathen worship. On an external wall of its modern vestry is a Saxon grave slab judged not later than early 11th century. 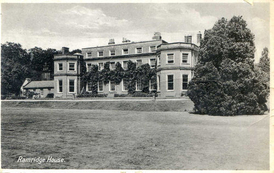 Noteworthy domestic buildings include Ramridge House, a large mansion (now divided into apartments) built on the site of an earlier house in 1779 and extended in 1858. Blissamore Hall (until recently called Clanville Lodge) also replaced an older building c.1812 and was then the home of Henry Hulton, a former customs officer of Boston, Massachussets but who fled when the American war of independence broke out. Clanville House is another early 18c elegant house and half a mile to its north Cook's farmhouse, built in the 15c is perhaps the oldest surviving dwelling in the parish but now has a modern extension.

In the 17c Weyhill had a bowling green but also stocks for minor punishments and a pound for stray animals. In the 19c Weyhill Brewery produced beer until it was taken over by Strongs of Romsey. From 1863 to 1988 Weyhill had a Church of England primary school, now an independent nursery school.
Until the second half of the 20c agriculture was the mainstay of the parish economy but its best known feature from at least the early 14c until 1952 was the great annual Michaelmas agricultural and, from the 19c, pleasure fair. Daniel Defoe declared it 'the greatest fair in all the kingdom' and it was estimated that around 300,000 sheep were sold there annually. The profits were great but resulted in bitter lawsuits between Ewelme Almshouse trustees, their tenant farming Ramridge, Rectors of Weyhill and Andover Corporation over how they should be divided. The dispute lasted from 1672 to 1694. The historic fairground booths survive, now converted into small craft workshops, showrooms and a café. Other parts of the former fairgrounds became first Dunnings builders yard but following the company's collapse in 1990 have been developed as part housing and part small industrial units. During most of the 20c Fred Hartigan, a well known race horse trainer had his stables and gallops opposite the fairgrounds. After 1945 Mayfield Industrial Estate also developed off the Fyfield Road.

A Penton Grafton yeoman, Peter Noyes and his family in 1638 emigrated to New England taking Agnes Bent from Weyhill with them. Noyes was to found the town of Sudbury, Massachussets. Other long running Weyhill and Penton Grafton families included Whale, Manfield, Guyatt, Fuller and Tarrant.
Copyright © Penton Grafton Parish Council - 2015